Pat Callis — Nowhere to Go but Up 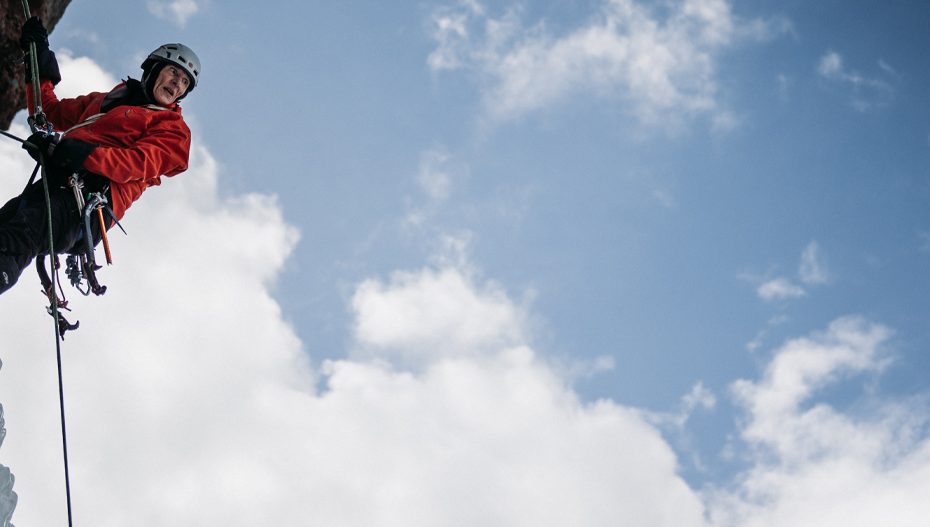 People look up to Patrik “Pat” Callis for many reasons, not the least of which is his 50-plus years pursuing ice climbing. In winter, Callis can be found anywhere from a few hundred to several thousand feet up the side of an ice-covered rock face, including Bozeman’s Hyalite Canyon, one of the largest natural ice climbing repositories in North America, which Callis is credited with discovering.

“Pat’s legend goes back to the very beginning of modern climbing,” said Joe Josephson, one of the original instructors for what would become the annual Bozeman Ice Festival.

With roots in the ‘90s, the Festival promotes ice climbing education and community-building for all ages and abilities. It’s put on by the Ice Climbing Alliance, of which Josephson is board president.

“When I started organizing the festival in 2006, [Callis] would sign up and take clinics from us,” said Josephson, who was impressed by Callis’ humility.

“He just wants to learn from others,” said Josephson, a recognized climbing expert and author on ice climbing, including the guidebook entitled, The House of Hyalite.

“[Climbing is] thrilling, satisfying, and addicting to some, but not to most,” said Callis. “Most climbers don’t know why they like climbing, they just do. Very young kids typically love climbing, and they do not try to explain why,” said Callis, whose wife of 58 years also did some climbing in the early years of their marriage, as did their young children, now grown.

“I believe it is the genes — genes that have little to do with our modern world,” said Callis.

Besides the climbing community, Callis is equally revered in the educational community.

He is a distinguished educator with 51 years teaching classes in chemistry and biochemistry at Montana Sate University. He was named a Regents Professor in 2017 and has mentored countless undergraduate and graduate students, as well as completed volumes of research.

And at 81 years of age, he is an inspiration for a life not only well-lived, but a life where climbing and teaching go hand-in-glove.

Teaching brought Callis to Bozeman in 1968, newly-married and in search of a job, which he found at MSU. He had just completed his doctorate in chemistry at University of Washington, as well as a National Institutes of Health post-doctoral research fellowship at Caltech. Callis connected with people whom he’d met from MSU’s ski team, as well as chemistry professor Ed Anacker, who was also a mountaineer.

“After visiting for an interview trip, I was sold for a number of reasons,” said Callis, who said he could never imagine living anywhere else. “There is nowhere in the U.S. where you can enjoy the outdoors so efficiently while holding down a college position, in my opinion.”

Although teaching and climbing both have been an integral part of his life, he never aspired to teach climbing.

“During the earlier years, I spent one or two days a year instructing groups on climbing, and have given several talks on climbing that were for the purpose of teaching, but never in a professional way,” said Callis, who despite his status in the climbing community, said he didn’t feel qualified to teach others.

Learning is a big part of Callis’ teaching job, which is about 40 percent teaching, but also 40 percent research — grants, publications, graduate students — and 20 percent service. “Research and climbing have a lot in common, especially if you like to establish new routes (do first ascents).”

“I was able to regain the level I had before and realized it was not at all about age,”

The only parallel he sees between climbing and teaching, said Callis, might be in the initial challenge of developing course material. He does, however, enjoy finding better ways to convey difficult concepts to his chemistry students, a process he equates with climbing a similar route over and over, yet still finding ways to make the climb easier.

His preparation for a particular climb depends on the climb.

“There is a big difference between going to Gallatin or Hyalite for a day of cragging, or ice climbing for a day on a moderate route versus getting ready for 16-pitch wall climb in East Rosebud canyon versus a multiday new, unclimbed rock and ice route in the Canadian Rockies or Alaska Range,” said Callis, whose accomplishments include the first recorded ascent of the north face of Canada’s Mt. Robson. “For the one-day climbs, there is usually little prep, other than making sure the gear and clothing is organized.”

If he wanted to really push himself ­— this coming from a man who has completed the 20-mile trek known as the Bridger (mountain) Ridge Run 23 times — Callis might prep with a series of increasingly difficult climbs and more and more pull-ups.

Otherwise, said Callis, he does little regimented training, preferring instead to stay in shape with occasional exercises at the gym, pull-ups on a board mounted above a door in his house, and taking advantage of exercise opportunities throughout his regular routine. He runs to his classes and up flights of stairs, for example. To maintain balance, on the advice of a climber-physical therapist, he stands on one leg while putting his socks on.

And, of course, he keeps climbing.

Back when he was 42, said Callis, he was asked about staying in shape, noting that his abilities declined when he was not climbing. “When I increased my climbing activity back to where it was, I was able to regain the level I had before and realized it was not at all about age,” said Callis. “You just have to keep climbing. In those days, the general belief was that 40 was over the hill, quite unlike now.”